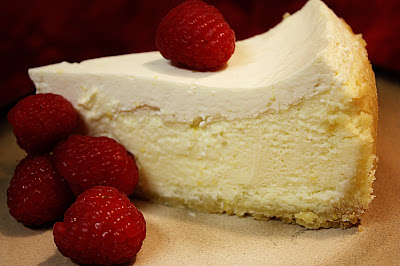 What is "Lion House Cheesecake" you might ask?
Well, it is a wonderful cheesecake variation that includes a tangy-creamy-smooth sour cream layer on top that will make your taste buds do a little happy dance. Seriously. We are huge cheesecake fans, and this is one of our favorites!
The recipe originates from The Lion House, a historic house located in Salt Lake City, UT. It was built in 1856 by Brigham Young, founder of Salt Lake City and president of the Church of Jesus Christ of Latter-day Saints. The house now includes a restaurant, The Lion House Pantry which is known for their fantastic dinner rolls.
Well, Emily recently perfected this already-fantastic recipe. Emily's husband isn't the biggest fan of graham cracker crusts, so she swapped the traditional crust for a shortbread cookie crust and put a nice twist to the recipe by giving it a lemon flair. So good! (What doesn't lemon make better?!)
Why not make something extra delicious this week?
And if you've never made cheesecake before--do not fear!!! Too many get intimidated by this velvety-smooth dessert. It really isn't difficult to prepare! Just invest in a spring-form pan and follow the recipe. You'll be golden. :)
Here's the recipe.
﻿Perfected Lion House Cheesecake
Crust
1 c. flour
¼ c. sugar
1 tsp. lemon zest
½ c. butter, softened
1 slightly-beaten egg yolk
¼ tsp. vanilla

Prepare crust: Combine the flour, sugar and lemon zest in a bowl. Cut in the butter until the mixture resembles coarse crumbs. Then, add the egg yolk and vanilla, mix well. Pat about 1/3 of the dough on the bottom of a 9” spring-form pan with the sides removed. Bake at 400 for about 8 minutes or until the crust starts to appear golden brown. Remove from the oven and allow the crust to cool. Now, butter the ides of the pan and attach the bottom (with the cooked crust). Starting at the bottom, pat the remaining dough on to the sides of the pan. It should go up about 1-2 inches.

Filling: In a large mixing bowl, beat cream cheese until smooth; add sugar a little at a time while mixing. Keeping speed on the mixer at medium-low add the eggs, one at a time, beating well (about 1 minute) and scraping the bowl after each addition. Mix in vanilla, lemon juice, and lemon zest and combine thoroughly. Pour into crust; fill to within half an inch of top to allow room for topping. Bake at 300 degrees for 55 to 60 minutes, until mostly set (when the pan is gently moved, the center will jiggle only slightly).

Topping: When cheesecake is almost finished baking, beat sour cream with a wire whisk; add sugar, vanilla, lemon juice and lemon zest and mix well. Pour over cake and bake an additional 10 minutes. The sour cream layer will not appear to be set or cooked enough, but it is! Just take it out and let it cool completely on a wire rack. Run a paring knife between the cake and the pan sides. Wrap tightly in plastic wrap and refrigerate until ready to serve, at least 3 hours but up to 4 days. For best results, let cake come to room temperature before serving (take out of the fridge about 30 minutes before desired time).

Here's where we link up.
Email ThisBlogThis!Share to TwitterShare to FacebookShare to Pinterest