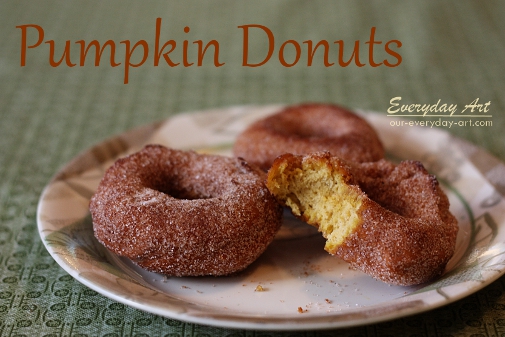 We traditionally make doughnuts in the fall, and this year I had some extra pureed pumpkin in my fridge, so I decided to try something new. After reading through some recipes online, I finally decided to go with good ol' Better Homes and Gardens Spiced Pumpkin Doughnuts recipe. These pumpkin doughnuts were the best homemade doughnut I've ever had, and I have made a fair amount! They were lighter and fluffier than most homemade cake doughnuts and had the perfect amount of pumpkin spice flavor.
If you've never made donuts, they really are surprisingly easy to make. You make the dough like you would any other quick bread, chill it, roll it out, cut it, and fry it in a vat of oil. Easy peasy. 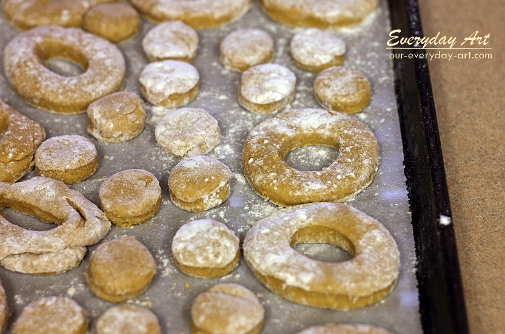 My favorite version is with the spiced sugar on it, but dipped in powdered sugar and frosted with chocolate frosting were also scrumptious. :) 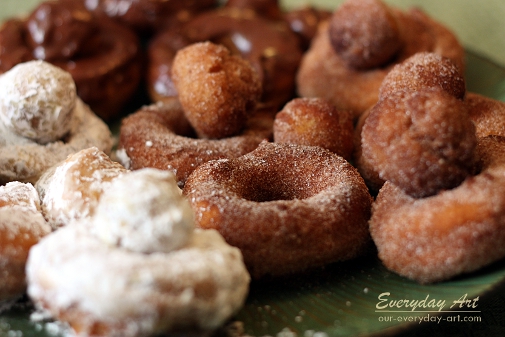 My kid is on a dairy-free diet, so here is my version of the recipe, although you can follow the link above for the original.

2. On a lightly floured surface, roll dough to a 1/2-inch thickness. Cut with floured 2-1/2-inch doughnut cutter, dipping cutter into flour between cuts. Reroll as necessary.

3. Fry doughnuts, 2 or 3 at a time, in deep, hot fat (365 degrees F) about 2-1/2 minutes or until golden, turning once. Using a slotted spoon, removed doughnuts from oil and drain on paper towels. Repeat with remaining doughnuts and doughnut holes. Coat warm doughnuts in Spiced Sugar. Serve warm or at room temperature. Makes about 15 doughnuts plus holes.

If you've ever had the desire to make homemade doughnuts, this is the time and this is the recipe to use!!!