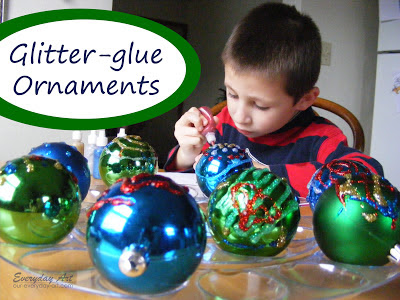 A week or two ago my son came home from pre-school and announced that they had used glitter, it was awsome, and I needed to buy some. "Just go and buy it next school day when I'm at school and I then I'll show you." (He HATES going to the store and so always reminds me to run errands while he's in class so he doesn't have to come... which I usually do because who doesn't want one less kid in the grocery store?
﻿ 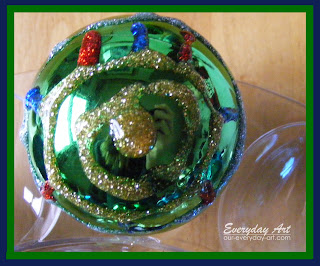 He told me all about how you put the glue on the paper, poor on the glitter, and shake the extra off.
I was seriously having nightmares about the possible messes. A 5 year old is one thing, but he also has an almost-2 year old sister.
﻿ 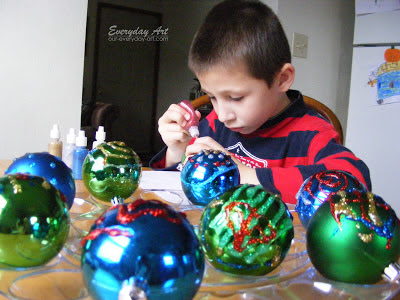 Luckily at the store a found a pack with 5 colors of glitter-glue for only $2. That, I figured we could handle. No dumping, shaking, vacuuming, crying... involved. Then at home I rounded up some old dollar store plastic (I mean "shatter-proof") ornaments and let him go to town.
For the next 3 afternoons, during his sister's naptime, I was the coolest mom ever!!!!
LOVE when that happens!
Actually, the glitter dried really pretty. I was afraid it would be bubbly, kinda like puff-paints, since that's how it looks when it's wet, but it totally dried nice and flat and looked great.
Maybe next year I'll get some for me and jazz up some other plain ornaments!﻿