Today we have a SUPER cute tutorial from one of Jaime's BFFs, MaryAnn.
Who wouldn't LOVE to have this tree mural in their kids' play room? or bedroom, or heck, even the living room. :) 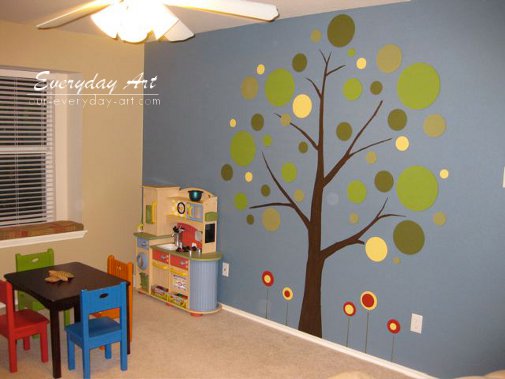 Here's MaryAnn's great tutorial.
For the circles:
I was going to buy the wooden circles from hobby lobby but my dad, who does a lot of wood working, sent me a bunch for my birthday when I told him what I wanted to do. He used a homemade circle jig and a bandsaw to cut them out of thin 1/8inch plywood. When I went home for a visit I decided I wanted more so I cut a bunch more out ranging from about 1.5 inch diameter to a 2 foot diameter (didn't end up using the big ones for the trees but did for another part of the room). The biggest circles on the tree are about 1 foot diameter. I sanded the circle edges smooth.
To tie in colors I had in the play room, I choose a green color from their play kitchen, a green that matched their play table chairs, and one other "tree green" that complimented the other colors and a yellow, also pulled from the play kitchen. The ones where I didn't find a color sample that was a close match, I had paint matched at home depot. All of the paint I used I got the sample size of Behr Ultra, which is just a few dollars. After choosing the colors, I painted similar circle sizes similar colors so the colors would end up being spread evenly through the branches as I spread out the circles sizes.

For the trunk:
I sketched a few tree trunk styles on paper to get a feel for the style I liked. Once I knew what I was going for, I drew free hand a colored pencil outline of the tree trunk and branches on the wall. (It took a few attempts to get it how I wanted it.) Then, I used painters tape to tape up the circles and rearrange them until I got the look that I wanted. Once in place, I marked the location of the circles on the wall with small pieces of numbered painters tape, which coordinated to the numbers I had written on the backs of the circles. Next, I used painters tape to outline the tree trunk and branches I had draw. (I had a problem when I put up painters tape planning to paint the next day and then it all fell off the wall, so its probably best to plan to paint right after the tape has been put up and it has the best adhesion.) Also, if I put up a piece of tape and then decided it wasn't quite in the right spot, I got a new piece rather than using the piece I already stuck to the wall once to avoid losing a good adhesion and having too much paint seep under the tape. Note: because my walls are textured, in most places I didn't end up with a tight seal of tape and a perfectly straight paint edge, but the small amount of seeping created a rougher bark-like edge which I liked since we were going for a tree look. Once the trunk was outlined in tape, I filled in the outline using a foam brush. The paint was sample size interior paint Behr Ultra Expresso Beans (dark brown) and while it was still wet, I added some streaks of Behr Ultra Roasted Nuts (little lighter brown) on top to give it a more textured look.

Putting it all together:
After the trunk paint was dry, I removed the tape and touched up a few spots with my background wall color where the paint seeped under the tape a little too much. After I finished the touch ups, I taped up the circles once again, made a last few placement adjustments, and used a nail gun and 1 1/4 inch brads to secure the circles to the wall. (The nail gun was my birthday present!) In some circles lower to the ground I put two brads so the circles wouldn't rotate if touched. One brad held securely but I knew the ones near the bottom would be "tested" by small children so the bigger ones down low got two brads. After the circles were secure, I touched up the paint over the nails with the appropriate color using a foam brush.

A few add-ons:
After I finished the tree and still had a bunch of circles left, I decided to add some flowers beneath the tree. To do so, I choose a red paint that coordinated with my other playroom colors, and the yellow color I had from the tree to paint 8 circles of various sizes. Again using painters tape, I masked of stems of various lengths, and using a green paint leftover from the tree, painted the stems. After the stems and circles were dry, I stacked two circles to create each blossom and nailed them to the top of the stem, again using the nail gun and 1 1/4 inch brads.

I also decided to add some circles above our toy shelves. I painted the largest circles (about 2 foot diameter) various colors from the leftover paint I had, spaced them evenly above the shelves, and nailed them up with the nail gun.

Finished product:
Ta-da! A fun, whimsical tree that gives a playroom a touch of the outdoors. This room is one of my favorite in my house. Its inviting for kiddos, comfortable, and fun. My projects are never "done" so I have considered adding a bird to the tree, leaves to the flowers, or other little details, which I probably will someday, when I don't have time but get an idea that I just have to try. :)