After sewing a hoodie and a bunch of leggings (coming soon) for my little girl, David thought it was his turn.
And he was right. What he really needed were some t-shirts for summer.
Back to the sewing machine!
After making a couple I decided it was his turn to design.
I told him he could draw anything he wanted and I would put it on a shirt. 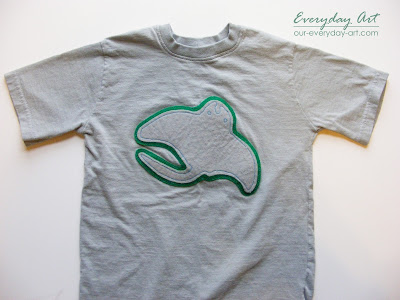 So here's what he drew.  It's a manta ray- with some sweet designs and colors.
Manta rays were the creature of choice that week. Lucky I asked him to draw this when I did, because by the next week he had moved on to tarantulas, and I'm glad I wasn't sewing a tarantula shirt. Just saying. 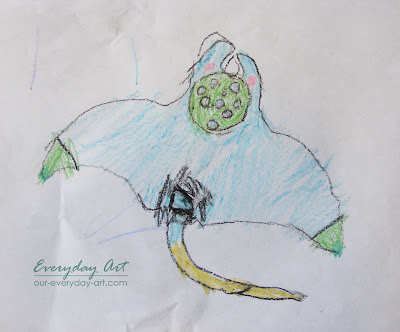 Unfortunately there were some limitations. Mom's sewing skills, fabric scraps to choose from, and most importantly, I knew if I tried to make the picture on the shirt exactly like the drawing I would inevitably fail and be in BIG trouble. So with permission, we simplified the design and this is what we came-up with. 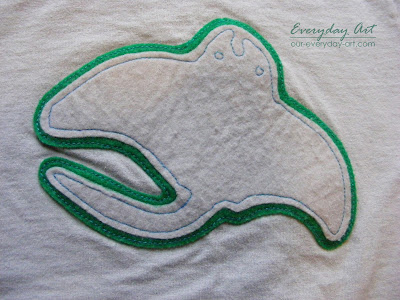 I just cut the silhouette shapes, layered them and ironed them on.
Then I traced his outline and recreated it with the blue stitching.
(I used double thread so it would show more.) Yes it's mirror image, I forgot to flip it before tracing to transfer paper, but I didn't think it really mattered. 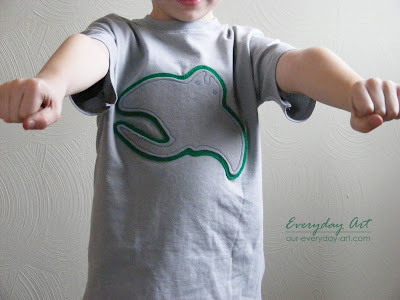 I think it turned out pretty cool. He loves it, which is what really matters anyway. 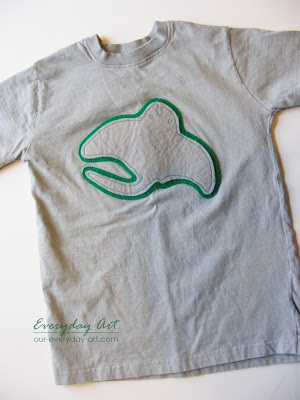 So why not let your kids design some clothes of their own?


here's where we link
Email ThisBlogThis!Share to TwitterShare to FacebookShare to Pinterest