Looking for a perfect breakfast or brunch to celebrate the 4th of July?
Look no further! 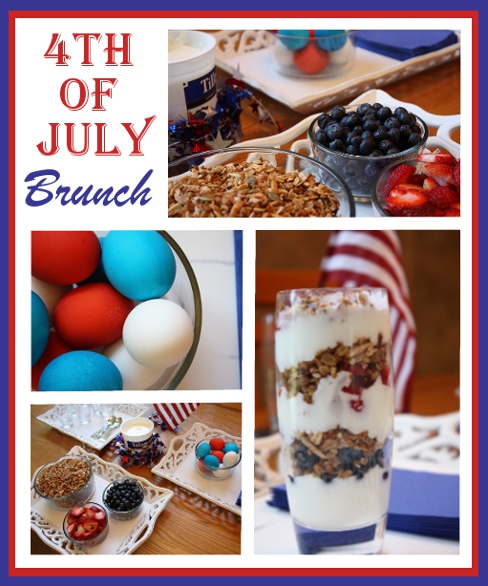 Last year I was searching for ideas for a festive family breakfast, but I was a little disappointed with what was out there on the world wide web. So this is what I came up with!

I thought it was a great breakfast by any standards (but I love yogurt parfaits so that's no surprise there), but particularly fun with all the red, white and blue 4th of July food. Other ideas I was contempating was waffles or pancakes with strawberry and/or blueberry sauce or crepes stuffed with sweetened ricotta, blueberries and strawberries.

What fun and festive breakfasts have you had on the 4th?

Hoping you have a wonderful 4th,

Want to be the coolest mom at your 4th of July BBQ this year?
Try making these awesome cupcakes and just see what your kids think! 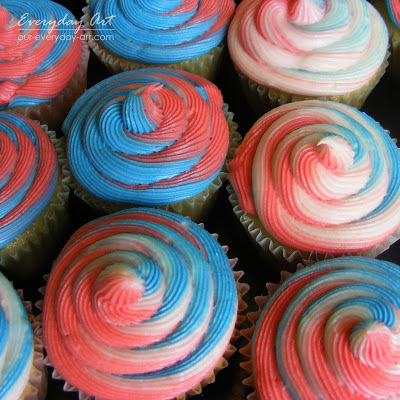 Aren't they so fun! I love the swirled frosting
and for the 4th you can't go wrong with RED, WHITE, and BLUE. 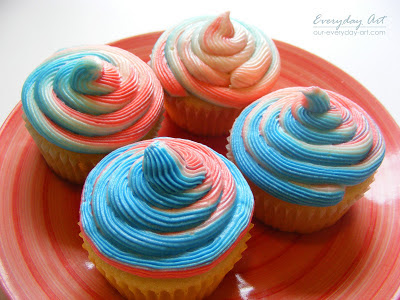 Ready to make your own yet?
They are as easy as they are impressive.

Start with WHITE frosting.
I chose to make a cream cheese / butter cream frosting because I think it is delicious.
You can even just buy a couple cans of your favorite if you want.
(No need for the nasty decorator stuff, remember, we want eat these.)

Divide the frosting into two. Set one half aside, this stays WHITE.
Divide the other half into two again. Dye half RED and half BLUE.
(I like to use the dye paste rather than liquid.
It takes a LOT of red dye to actually make red frosting, and the paste won't thin your frosting as much.) 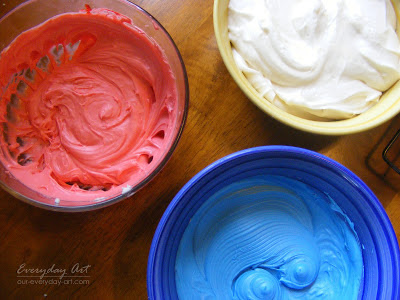 *With all this dividing and mixing, your frosting may have softened quite a bit. If so, cover and put it in the fridge for a while to stiffen in back up. If the frosting melts it will be droopy and gloopy.

Now, take a knife an spread some blue frosting in a long stripe down one side of your pastry bag. 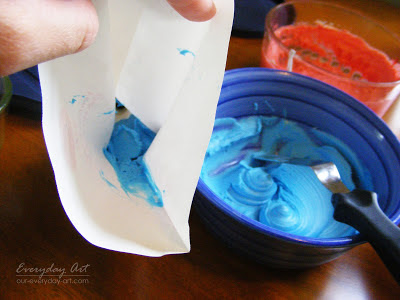 Using the red frosting, make a stripe down the opposite side of the bag. 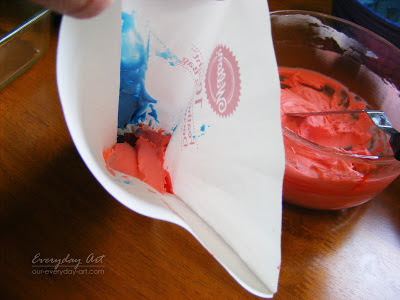 Now spoon in WHITE frosting till the bag is about 2/3 full.
Put the extra frosting back in the fridge so it doesn't melt. 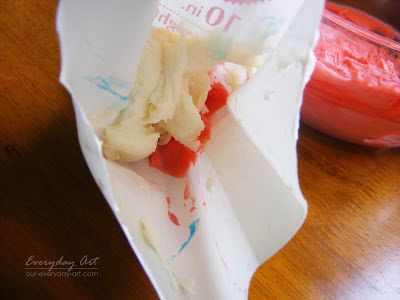 *I used a frosting tip to make the grooved edges (I think Wilton 199?) but you can just use a round opening or even cut a hole in a plastic bag if you have too. The frosting will just come out smooth instead of ridged.
If you've been wanting to try cake decorating here's a great kit to get you started.
Wilton 23 piece Cupcake and Cake Decorating Set
It has everything you need to get going without a huge investment :)

Now frost your cupcakes!
Start at the outside edge of your cupcake and squeeze the frosting on along the edge gradually moving toward the center and overlapping a bit as you go. Think of a snail shell. 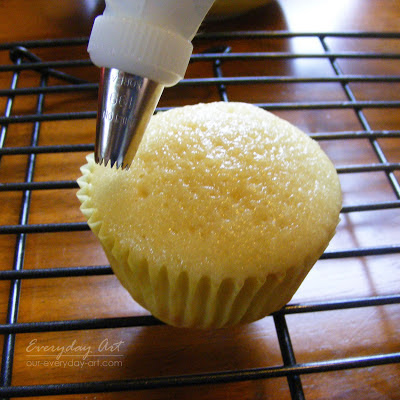 When you get to the top quit squeezing and pull the tip straight up.
Tu-dah!
I found that the trick to getting the nice rings of frosting instead of wobbly or uneven was just to go fast.
Just go for it. It really is easy. 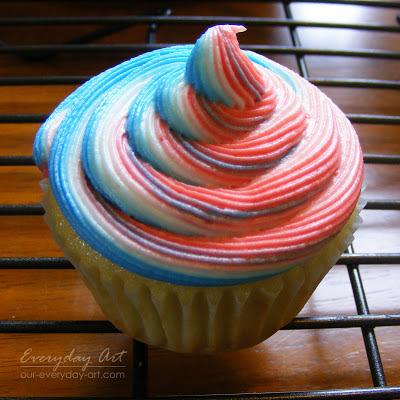 Now keep going until your frosting bag is almost empty.
I squirted the last tiny bit of each bagful into a bowl because at the end the frosting would start to get warm and the colors would all start to squish together and make a gross purple-ish gray-ish color. Yum. I really didn't waste a lot though. Just enough by the end to spread on a couple graham crackers. 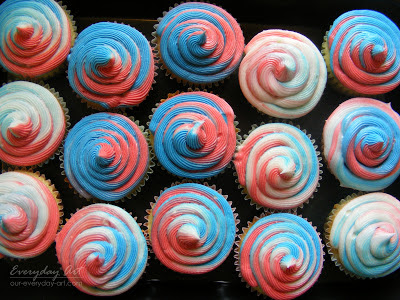 Refill your bag and keep on going!
I love how they all turn out a little different.
Not too bad huh? 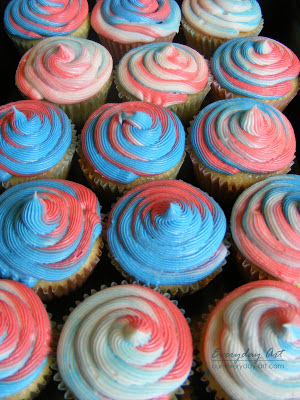 I took these to a party a while ago and none of the adults were eating them -
and I was a little bummed, not wanting to take home 2 dozen cupcakes, until someone finally asked if I had made them or bought them. Then once the words home-made and cream-cheese were spoken,
it was a whole other story. 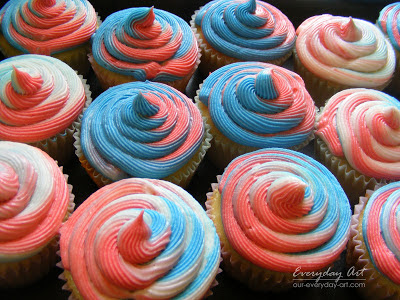 *It is July, you might want to keep the cupcakes in the fridge until you're ready to serve so the frosting doesn't melt.

Happy 4th of July everyone!!!!

Here's where we link 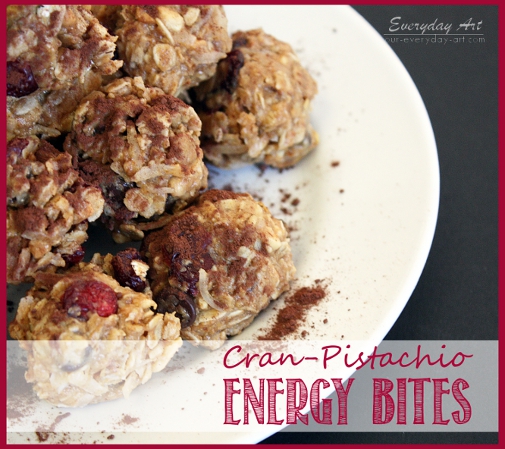 There are a lot of recipes out there for energy bites, so I thought I'd share my version! My husband and I like to joke that "energy bites" is quite the euphemism for "high-calorie food" but whatever. They taste great, loaded with healthy stuff, and as long as eaten in moderation they really are a great, compact source of nutrients and energy. I think they are great to take hiking or any time you are on the go. My kids and I sometimes pop a few before gymnastics.

Every time I make energy bites they are a bit different because they really are so adaptable. Cranberry and pistachio are a regular mix though--some of our favorites. :)

Whip up a batch and enjoy!

Mix all the ingredients together in a bowl and chill for about an hour so that it is easier to roll into balls. Once rolled into balls, store in the fridge. You can add more oats or nut butter if you need it more dry or more soft.

I was trying to decide what to say about such beauty, but really, what can be said? A picture is worth a thousand words.
Lucky me to have a mother with such beautiful gardens.