Some lucky mom has a brand-new 4-year-old and that lucky mom is me! Yea! I think reaching 4-years-old is great. I mean, all ages are great and have their charms, but something about turning 4 is like a big smile--little more mature, more emotional control, all sorts of ideas, fun to talk to, likes to do a little more "big-kid" stuff, potty training is (usually) a done deal, what's not to love?

Well, I sure love my 4-year-old. :) She is a crack up.
One of my favorite little quirks about her is that while most kids have imaginary friends, she has imaginary monsters--and not the scary kinds. These monsters (there are 3 of them--The Bacson (from the most recent Winnie the Pooh), the Tiny Weeny Monster, and Rainbow Swirl) are her friends and scape-goats. She blames all bad on one, all good on another, and the 3rd is just left open for wonder and imagination--it has recently evolved into a flying unicorn actually.
Anyway, she's great. We've always said if we can just get her to channel all her determination, energy and spunk into goodness, then the world will forever be a brighter place because of her.

She wanted a rainbow party and has had her heart set on it for months and months. 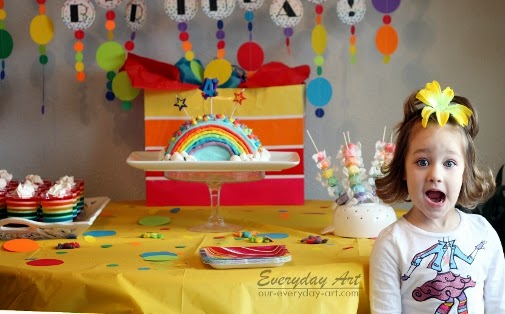 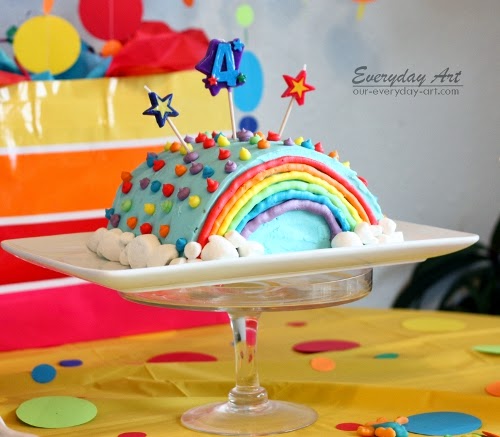 Yea! She loved it. In the morning she stomped her foot and squealed, "ah! awesome!" phew.
I must say, I thought it turned out pretty darn cute too--lots of spunk and fun, lots of brightness. I got the idea here, but didn't want to deal with fondant (everyone tells me that it's not so hard, but still....).
Here is the Rainbow Cake Tutorial post.

Then with a rainbow party, you can't help but make rainbow jello. More on that later too.... 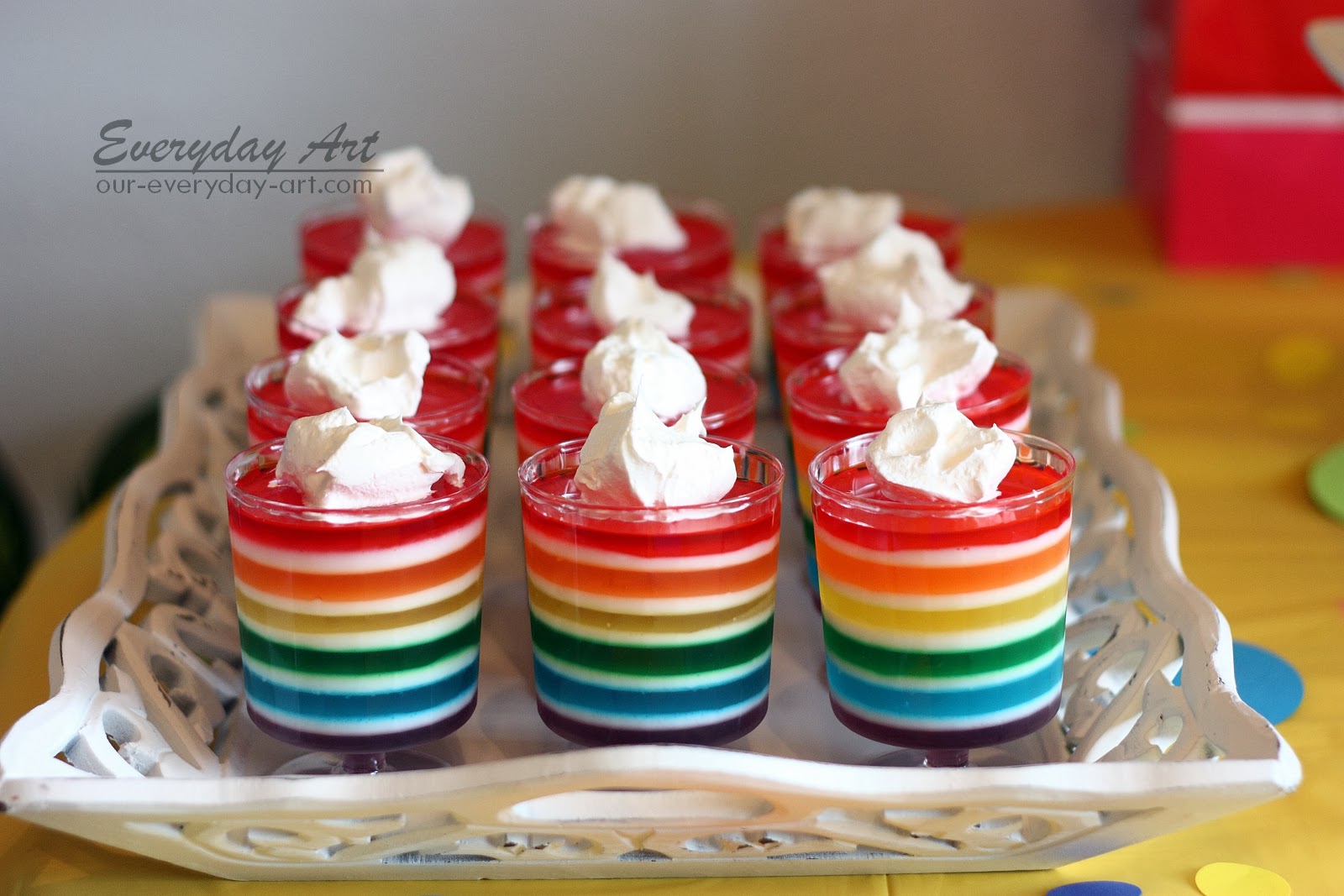 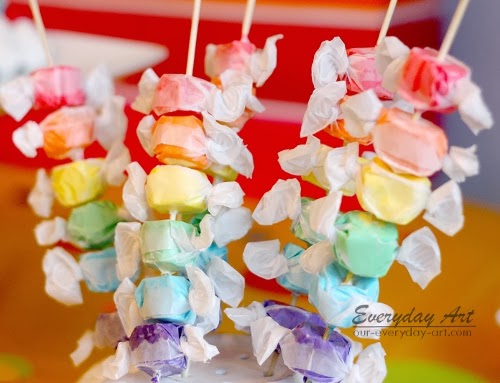 As any mother of a 4-year-old knows, the treats are the most important part, but I threw in some decorations too. :)

My total favorite was the sewn paper circle garlands! I've seen these around before, but dear Emily had the idea to dangle them from the ceiling, and I love the effect. I noticed a few days before the party that JoAnn's had 40% of their hole punches, plus a 15% off coupon, so what was I to do? I already had the 1-inch circle punch from the paper mache bowl project, so now I added a 3-inch hole punch to my stash of tools. And as much as I love these dangley garlands, I'm thinking it'll get lots of use.

And did I mention that they are a snap to make? I whipped all them out in an evening while listening to an audio book with hubby. :) 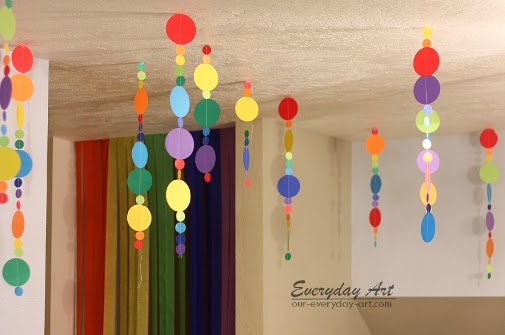 Emily also made some great rainbow birthday printables to go with it (more on that later too!). :)
Here you can see the birthday banner. 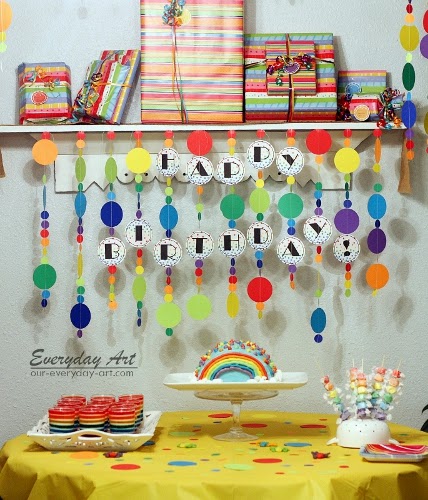 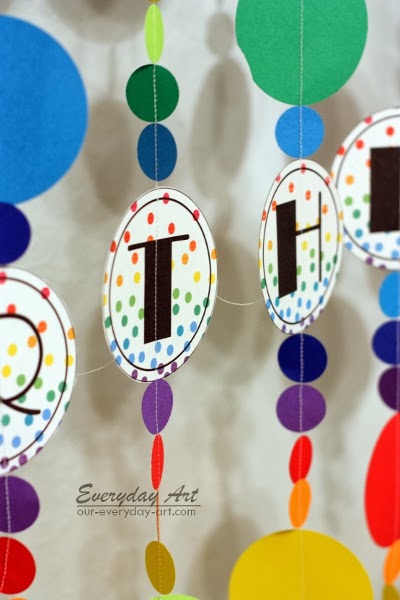 Earlier in the week my girls wanted to paint, so we decided to go rainbow crazy and paint lots and lots of rainbow pictures. These are only a small sampling of the rainbow art we had taped up around the house as decor. :)
They got a kick out of being involved in the decorating. 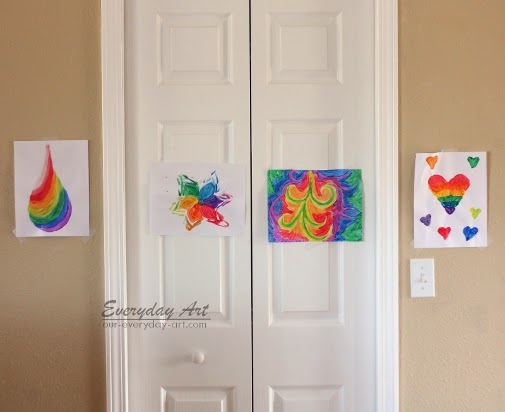 Now a few party games:
Pin the cloud on the rainbow! 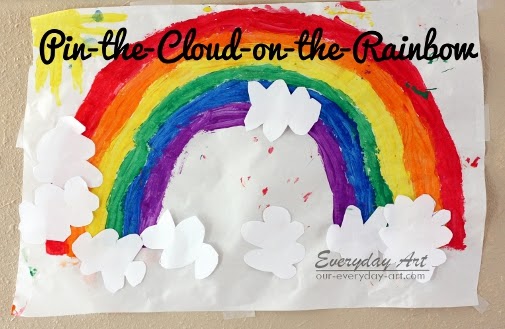 Good grief, I thought the kids would enjoy this game, but I had no idea they would LOVE it. Seriously--they went bonkers. Giggled and squealed and it was just great.

Then we also made pinwheels with all that extra copy paper we bought. In truth, they didn't spin super great, but the kids didn't seem to mind. 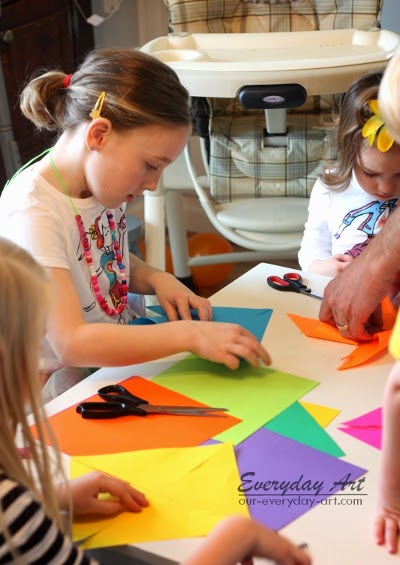 I had a few other games "on the back burner" in case we needed them (Candyland, reading a rainbow book, chalk drawings outside) but the kids just wanted to play, so that's what we let them do.

It was quite the successful rainbow birthday party. The birthday girl was well pleased. 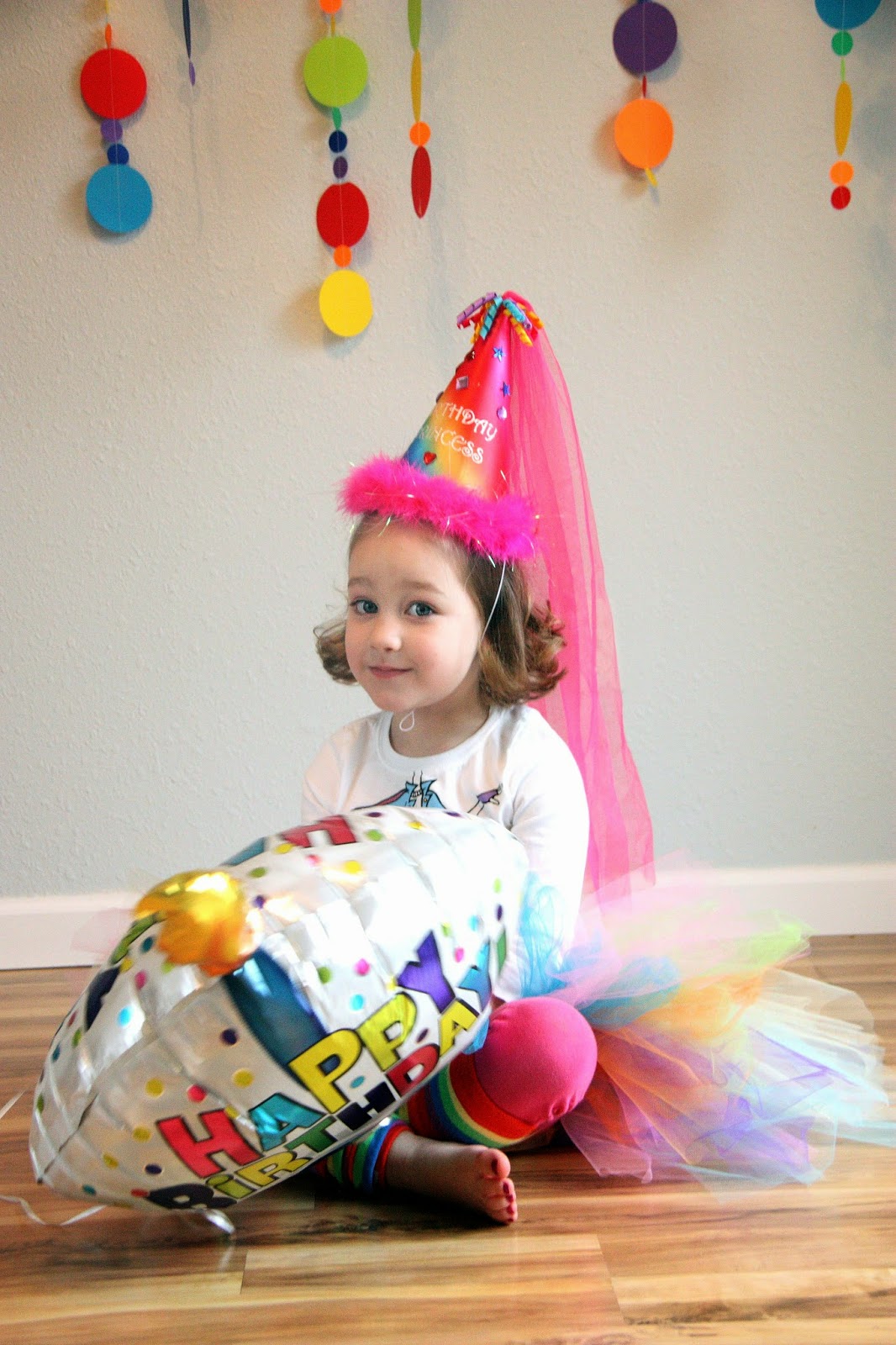