Mmmm, boy, I sure to like pie!
I have always heard of Black Bottom Pie, but I must say I had never eaten it, until I recently made it. Yum-o! If you are a chocolate pie fan, then this is the pie for you! 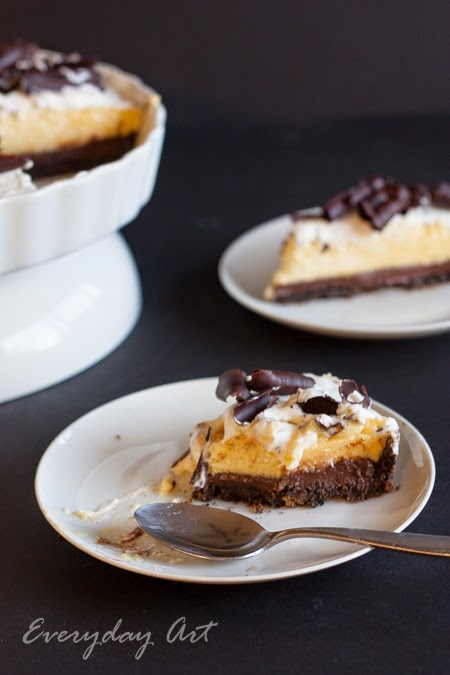 I read up a bit on Black Bottom Pie and it appears that it was quite the sensation in the early half of the 20th century. People were crazy for it. In fact, Duncan Hines, author of America's trusted Adventures in Good Eating, wrote that Black Bottom Pie was "one of those marvelous creations that has somehow managed to keep its light under a bushel." (food timeline)
So true. I had thought of Black Bottom Pie as being kind of retro-dish--a recipe I can find in my grandmother's Better Homes and Gardens cookbook, but not in any more recent ones.

Well, all this made me think that it was time to revive it and give it a taste test.
So I did. And it was marvelous.

I hosted our book club last month where we were discussing Edgar Allen Poe's works, so I thought this pie's dark bottom would fit perfectly.

The only problem was that my home-grown eggs have so much darker orange yolks, that the white creamy layer I had envisioned (and saw with my own eyes at my in-laws house when I made it for them with store-bought eggs) was no longer white but down-right yellow! Not fitting for my black-and-white theme. Alas, what trivial problems we face these days. Trivial it might have been, but it wouldn't work for me, so I unconventionally covered mine with whip cream as well. I've never met anyone who complained about a little extra whip cream.

Then, I covered the top with chocolate shavings. I bought the darkest chocolate I could find--I think it was 82% cocoa--melted it with a little butter, then let it harden again and used the vegetable peeler to make lots of lovely chocolate curls.

My one other modification was with the crust. It seemed that graham cracker or gingersnap crusts were the traditional crust. I wanted to make sure my crust was dark, but I didn't want it to be so much darker than my chocolate filling, so I crushed about 2/3 gingersnaps and 1/3 Oreos for the crust. Perfection! 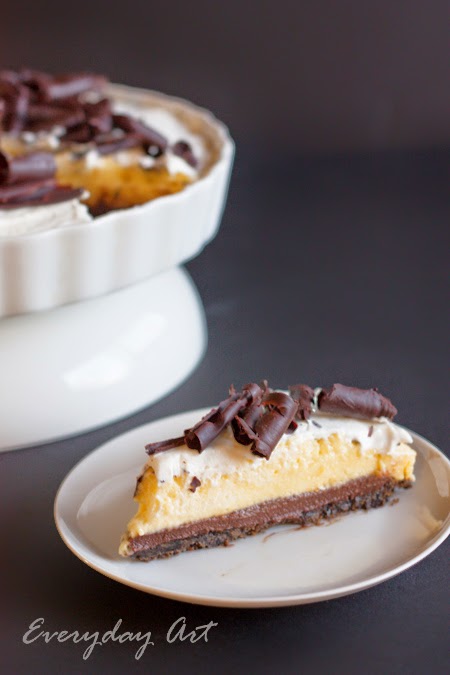 To make the pie, you first bake your cookie-crumb crust and let it cool (it did it a whole day in advance actually). Then you make a rich custard. Into half of the custard you melt some good chocolate and poor that into the pie crust as shown below. Then to the other half, you fold in whipped, sugared egg whites. And that's pretty much it. It was different than baking I was used to doing, but not difficult. 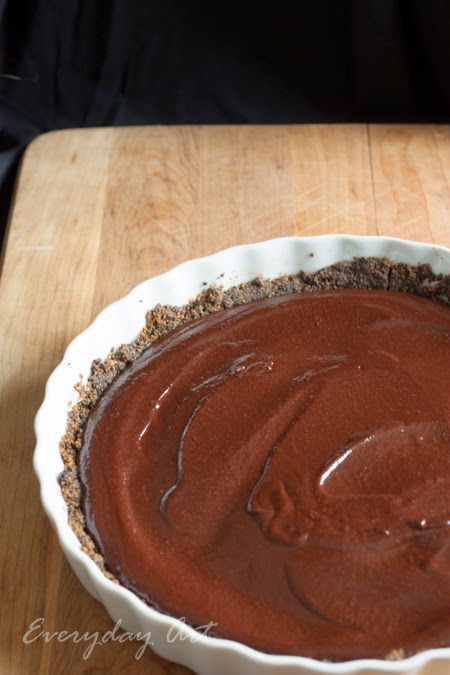 Know any chocolate pie lovers in your life? Show them you love them and whip them up a good Black Bottom Pie.
Or perhaps save it for something special like Thanksgiving? Christmas? Maybe even Valentine's Day?

Prepare crust: Preheat oven to 375°F. Mix the cookie crumbs and butter together. Press into a buttered 9-inch pie pan. Bake for about 8 minutes. Cool.

Prepare Filling:
1. Combine ½ c. sugar and cornstarch. Slowly add milk to the egg yolks, then combine with the sugar/cornstarch mixture in a saucepan. Cook and stir over medium heat until the custard thickens and coats a spoon. Remove from heat and add the vanilla.
2. In a medium bowl, place the semisweet chocolate. Pour 1 cup of the custard into the chocolate and stir until melted. Pour into the prepared pie crust; chill.
3. Meanwhile, soften the gelatin in the cold water. Add this to the remaining hot custard. Stir until the gelatin is dissolved. Stir in the rum extract. Chill until slightly thickened.
4. Beat the egg whites until soft peaks form then gradually add ½ cup sugar; beta until stiff peaks from. Fold in the custard-gelatin mixture. Chill until the mixture mounds well. Pile this over the chocolate layer. Chill until set.