This has been a busy summer for me. New house, new yard, jobs, etc. etc.
For whatever reason, it has been difficult for me to relax and breath and enjoy it all.
I have found time to do that, but it has been much less often then I would like. 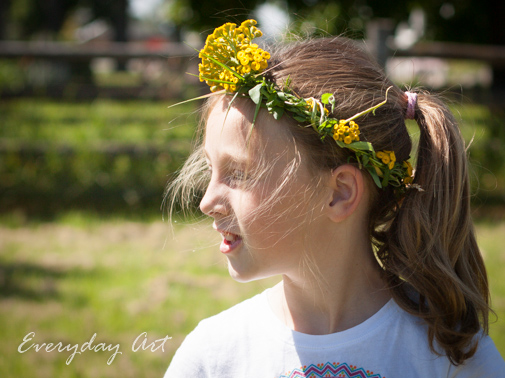 For our summer crowns, we used 2-foot long pieces of grass (being determined of course to not think of the trimming task that hasn't been completed or the buying-and-installing-a-new-spark-plug for the trimmer task that hasn't been completed either). I pulled up that un-trimmed 2-foot long grass and sat down with my girls under the shade of a willow tree, and we braided. We fortified our grass braids with a few un-weeded  morning glory weed vines, and they looked strong and lovely. Then we went to the tansy weed and picked tansy blossom clusters to weave into our crowns.

And yes, we were interrupted with bathroom breaks and impatience and all the typical things children tend to do, but overall it was a lovely little hour we spent together.
I hope they remember.
I will. 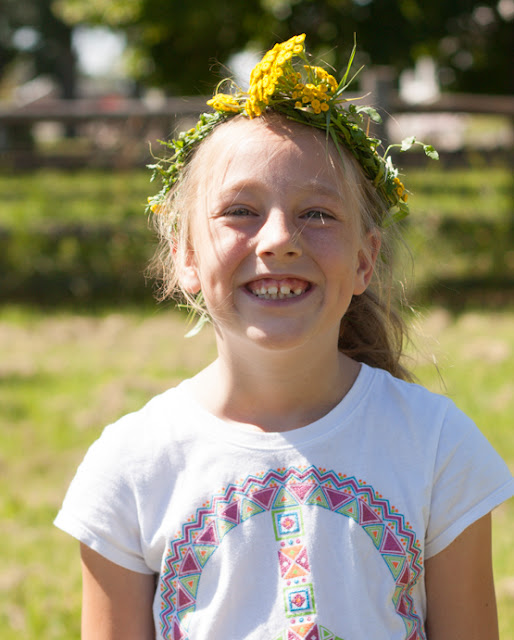 Rest is not idleness,
and to lie sometimes on the grass under trees,
on a summer's day,
listening to the murmur of water
or watching the clouds float across the sky
is by no means a waste of time.
-John Lubbock 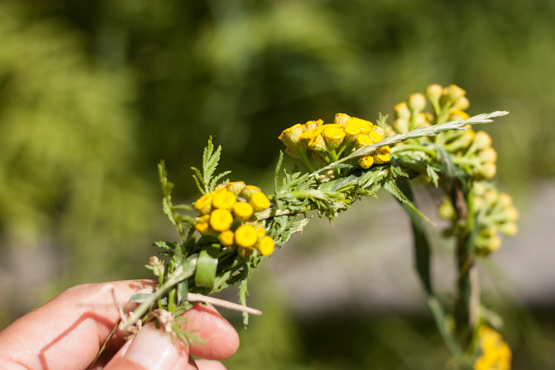 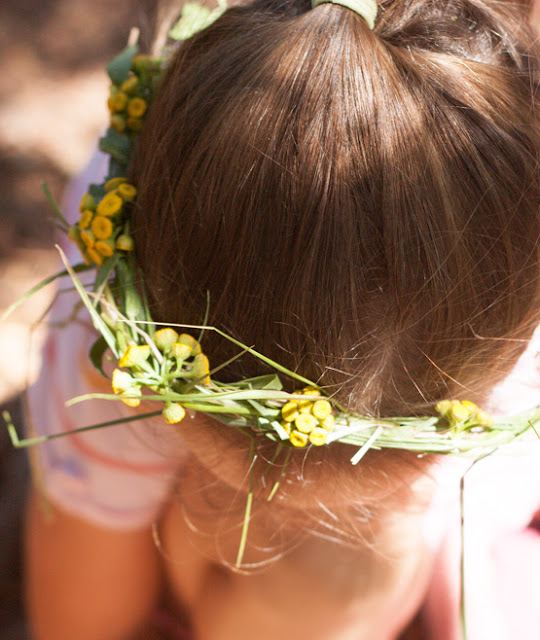 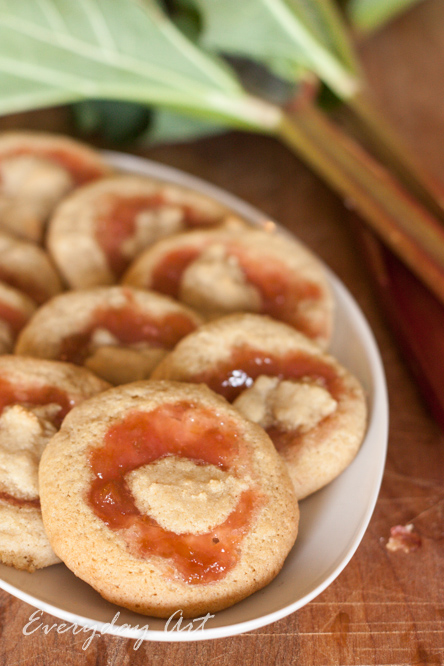 If you are a regular over here at Everyday Art, then you are probably starting to notice that I really like rhubarb! I really like it, and I have a plethora of it, so I am always having fun trying out new recipes with it.

These cookies were SO soft...maybe a bit too soft honestly--you'd want to make sure and cook them completely and then not store them in a sealed container or they'd just go mushy.

BUT if you did fully cook, even slightly over cook them, then they were fabulous. So soft and delicate--really rich, eggy, buttery dough, with a nice tangy rhubarb kick!

Too fun. We made a BIG batch and shared it with neighbors in our new neighborhood. Gotta share the love, right? 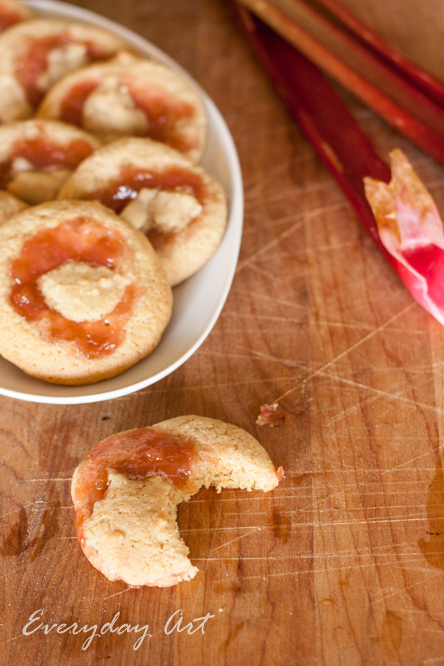 I got the recipe from Taste of Home.

Here is the recipe link. 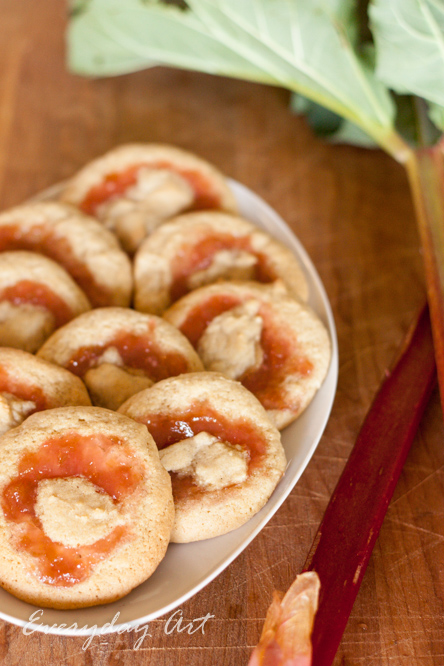 This is what I call "summer mouth!" 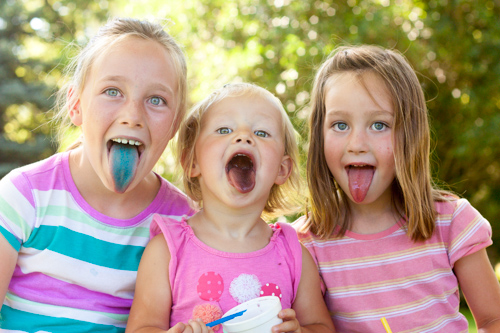 Guess what we did today!?

Don't you love how once summer hits tons of "Icee Shacks" pop up all over the place? I love it because it is such a symbol of summer. I can't imagine a summer without one--the one by the pool, the cute one with the tiki torches--they are all great. My favorite one though is the one around the corner from my mom's place. It's been there for ages--ever since I was a kid. I remember going to it when I was young, and now it is still my favorite one to take my girls to.
It's dusty and dirty, the picnic tables (a recent addition) are typically splattered with sticky bright-colored splotches and its loud with all the kids running around, the ice shaver running full tilt. But despite all these seeming imperfections, it is perfect--perfectly summer.

This particular trip my 5-year-old wanted to be pulled down in a wagon full of bubble water. ;) So that's what we did. Why not?

Mine has been and probably always will be Pink Lemon Sour!

I mentioned a while ago that we irrigate our pastures and that it has been lots of fun.

Well, there is yet another fun part of irrigating--the drainage pond!
Long before we lived in this house, the overflow of the irrigating would drain into the fields out behind us. Now there are houses there, so a berm was built and now the water collects into a pond.
A very lovely (very fun) pond. 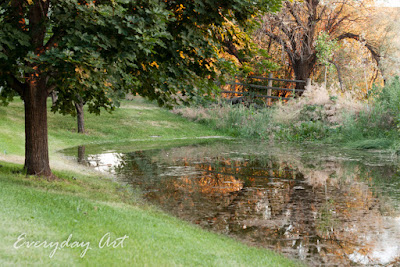 Last time we irrigated, I took these pictures right as the sun was setting. I loved how some of the leaves and branches were lit by the warm sunlight, while the sun had already set for other leaves. 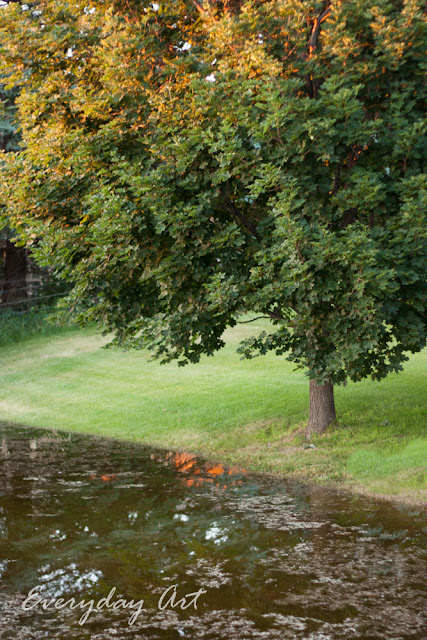 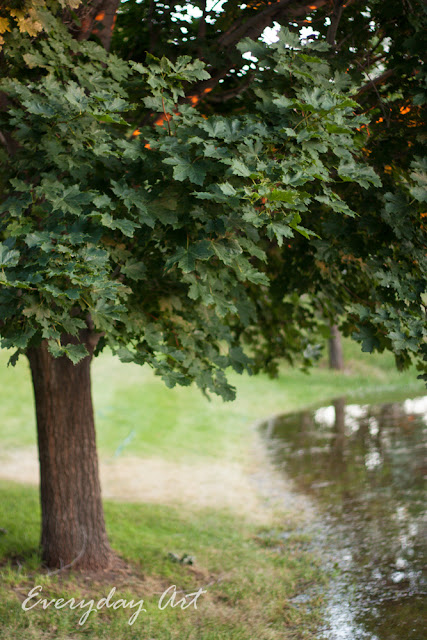 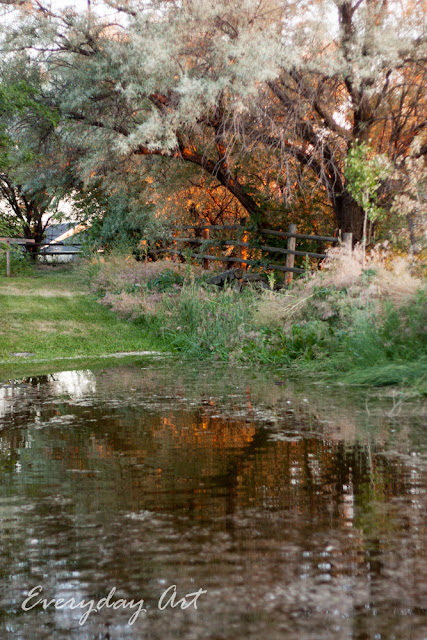 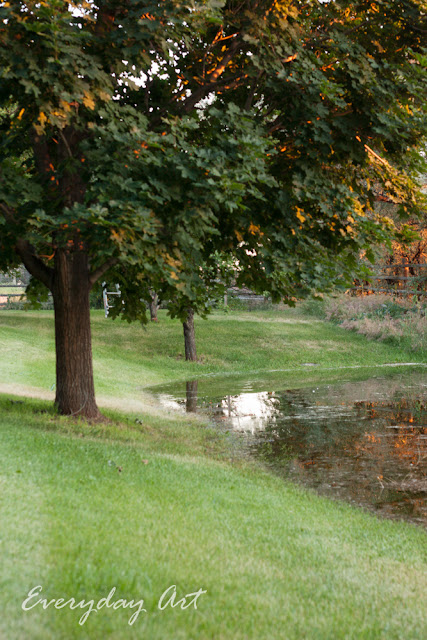 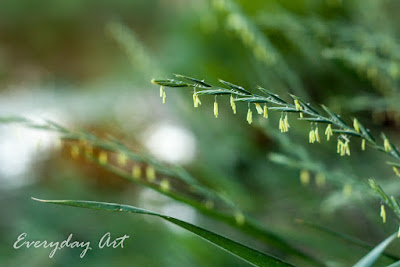 So peaceful and calm.

It wasn't always this way--my kids have an absolute blast paying in it all day long. It's just deep enough to really splash and have a wild, wet time! 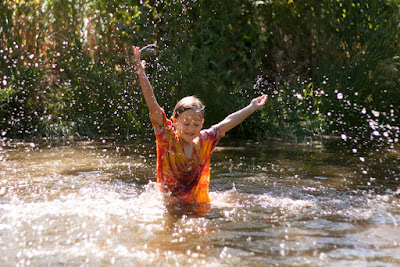 Fun and beautiful on every level. :)

Guess who got goats!

It happened!
We now have goats.
We put up the goat fence, built the house, read a book and were ready for the real deal!

Five, very cute, minis. They are so tiny and sweet.

This one here is Oreo. 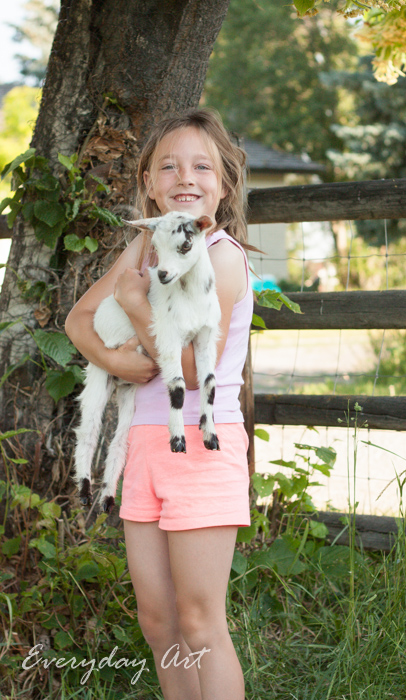 And here is Rose. 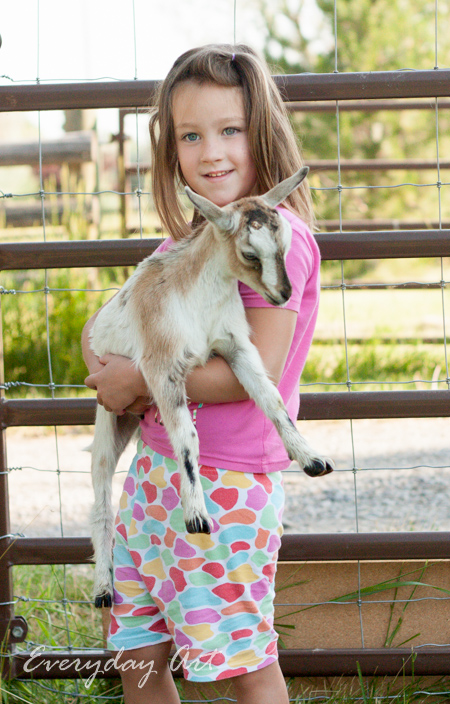 I knew my kids would enjoy this, but I have been surprised at how much fun they have been having with their goats. My girls play with them like dogs--run through the field and play around. The best is feeding time though. These goats are young enough that they still need to be bottle-fed, so every morning and evening we are out there with bottles of goat-formula for our babies.

My youngest is feeding "Skip" in this image. 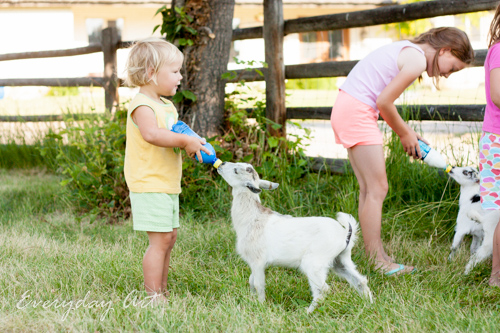 I think it is sweet to have my girls up, first thing in the morning, still in their jammies feeding the goats.  They get quite the kick out of it too. 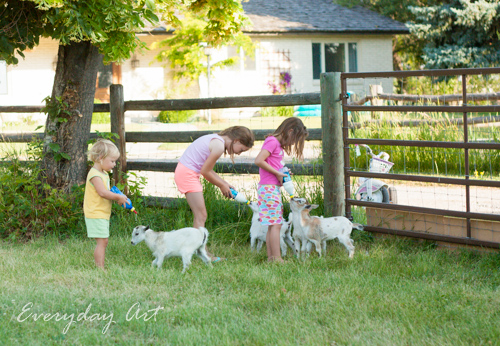 Initially we were just going to get three.

But, the people we bought them from were bottle feeding 5 baby goats--the 3 my girls chose, plus 2 others. One of the others was my favorite, so I decided I wanted him too, and how could we leave just one? They were rather attached to each other, so we bought one for my husband too.

The little white one below is just tiny and has been named (by my 2-year-old) "Sleeping Beauty." Poor little boy goat.
My oldest wanted to know if I thought he'd grow up confused since he has SUCH a girl name and since he couldn't make the cells to make babies. :)
(We do not have "bucks" but instead "wethers" so they won't be breeding.) 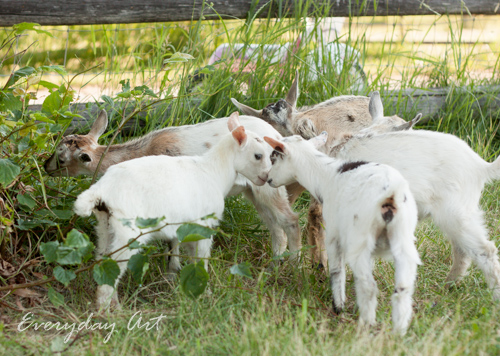 And here's mine--Tanner. He is the most friendly. Apparently his mother rejected him and so was raised by people. Consequently, he is the most attached to being with people. When we walk away he cries our "maaa! maaaa!" SO LOUD.  Kind of pathetic really. And when I pick him up, he just snuggles in and is perfectly content. Too fun. What an adventure we have started. 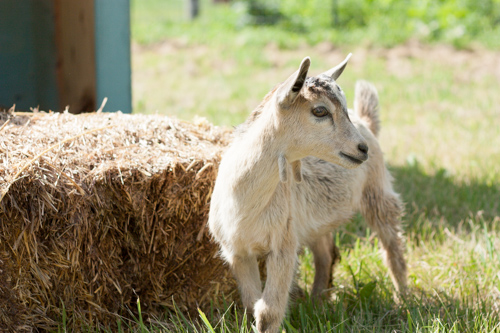 Before we got them many people told me at what a pain the goats were--that they eat everything and will kill our trees, and that they are master escape artists. Well, they are eating our trees, so hubby bought more fencing to put around the little ones we want to keep, and they managed to climb through the holes in the fence in one area, so hubby bought chicken wire and updated the fence. Already. So far though, our fixes are holding. :)